Nelson Mandela, Forgiveness, And The Road To Freedom 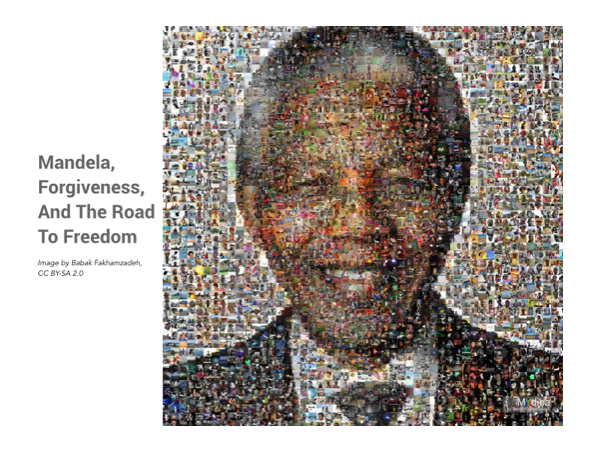 In 2002 and 2003 I traveled to South Africa, spending most of my time in Johannesburg and Cape Town. While I was there, I learned two things from Nelson Mandela that inspired my business and completely transformed my life.

The first thing I learned from Mandela (affectionately, “Madiba”) was about freedom.

It came from his example: how he responded to being locked up for 27 years in a South African prison, during apartheid.

The lesson: no matter what happens, you can choose to respond instead of reacting.

The ways that people treat you (in the words of Yogi Bhajan) are a “reflection of the state of their relationship with themselves…rather than a statement about your value as a person.”

And when you keep this truth on your radar, you literally give yourself more power.

So you’re more capable of making that choice…from moment to moment…to respond, rather than react.

Basically, you’re influencing your own ability (and therefore yourself) to make more powerful choices, more often.

For Madiba, this wasn’t always easy. In fact, it was probably never easy.

But he kept at it, because he knew that freedom starts on the inside.

He knew, just like we all know, that we’re chock full of knee-jerk reactions…just waiting to be unleashed.

Big ones, little ones, and everything-in-between ones.

But in those beautiful moments when you are able to choose…to choose and respond…you are literally creating freedom inside of yourself.

Freedom from reaction. From habit. From the past and from the future.

Freedom right now—for one beautiful moment—a moment that’s filled with the seeds of all possibility for something new, something different, something better for the world.

27 years in prison under the apartheid regime. Then he was elected President in 1994.

And the story continues…

If you take even a few minutes to learn more about Madiba, you’ll see something amazing. One person who allowed himself to find the gifts in an incredibly dark situation so he could influence his own of life and the course of an entire country.

“For to be free is not merely to cast off one’s chains, but to live in a way that respects and enhances the freedom of others.”

This quote offers a fabulous bridge to the second thing I learned from Madiba.

It was also about freedom. But this time it’s freedom that’s born from forgiveness.

What happened under apartheid in South Africa resulted in violence and human rights abuses from all sides. No part of society escaped this.

So South Africa took a revolutionary approach to healing: truth, reconciliation, and the possibility of forgiveness on a large scale, through their Truth and Reconciliation Commission.

In a nutshell, “Commissions often hold public hearings in which victims/survivors can share their stories and sometimes confront their former abusers. These processes sometimes include the hope of forgiveness for past crimes and the hope that society can thereby be healed and made whole again.” (Mark R. Amstutz, The Healing of Nations: The Promise and Limits of Political Forgiveness)

Nelson Mandela taught me that when you start forgiving others, you start freeing yourself.

More influence means that you and I can do even more great things in the world, and make a bigger impact, whether we’re helping one or 10 or 10,000 people.

Because this road to freedom is a long road: in our hearts, in our minds, and in the world around us.

And the only way we can get there, is together.

If you’re a kick-ass, heart-based woman and you understand the power of forgiveness & influence for your success, then grab your spot for this free, live, online 79 minute masterclass!

Here’s What You’ll Learn During This EXCLUSIVE MasterClass >>

1. Discover the surprising method I used to attract two of my biggest, most lucrative clients and get my teachings & message to 23,000+ people.

2. Understand why a Fortune 100 company asked me to help them shift culture & increase customer loyalty (even though we hardly knew each other).

3. See how you can use my simple strategy for how I turned 1 speaking event into five more… opening the door for me to train 479 global leaders& visionaries.